Winter Storms
What a great winter so far! Rain totals are way up beyond average. Fortunately, all the storms have been relatively mild so far as rain fall per hour rates go. In addition, they have been spaced out enough where the soils have been able to absorb the majority of the rain fall. It’s been rather windy on a number of occasions, but to date damage due to falling trees has been minimal. All in all, one could not ask for a better rain season. With a good portion of February and all of March to go hopefully we will see a big dent on our historic drought impacts along with full lakes and reservoirs.
On three of the storm occasions the fire chiefs have reached out and requested we put CERT folks on standby for Situation Reporting or “storm watch”. A big thank you to all the folks who quickly answered my requests for assistance.
January CERT Class
In late January we graduate our largest CERT class ever. The registration got away from me and we ended up with 53 graduates. As you can imagine the final class, the skills practice, was a bit hectic. We had quite a great turn out from the Cayucos area, which was nice to see. I had a lot of support from current team members who helped teach and others who acted as “victims” on the last night.
An interesting note is that I did not advertise at all for this class. The large participation came from word of mouth from existing CERT members; Thank You!
Insurance Issues
The recent large fires and subsequent flooding issues have caused the state of California to rethink the Disaster Service Volunteer Workers insurance program. They claim it is better and more user friendly. Over the next few months Chief Knuckles and I will be trying to figure out where and what we have to do to meet the new program.
Morro Bay and Los Osos Residents who are CERT members are currently covered with insurance. Cayucos residents were covered by the fire district. The district dissolved in in December and is now served by San Luis County Fire, who does not provide insurance. I am working with the chiefs to resolve this issue.
Weed Abatement
What, it is still raining! Yes, it is, but the heavy rains are going to make for a bumper crop of weeds come this spring/summer. For those of you living in fire prone areas it is not too early to start thinking about weed abatement. One would expect it to be a late fire season start. With heavy winter rains it is important to plan on cutting weeds latter in the season so as to avoid having to cut multiple times. Questions about weed abatement…… call your local fire department.
Spring Field Training Exercise
I have set a tentative date for a spring field training exercise for April 16th. We will most likely hold this exercise at Del Mar Park in north Morro Bay. At this event we will review and practice a number of skill sets including; situation reporting, radio/communications, field observations, and emergency medicine. We most likely spread the exercise through the afternoon and early evening. This format allows for folks who don’t work to come early making room for those who work to come later in the afternoon. More details will follow, save the date. If you have any interest in helping with this exercise …… I could use the assistance.

This entry was posted on February 25, 2019 by nramos2235 in Newsletters and tagged newsletter. 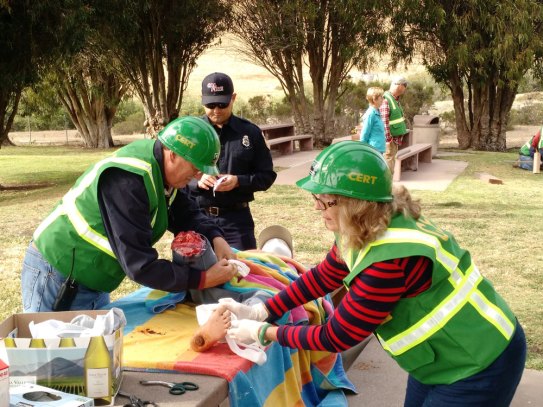